Iraqi Youth in Flux: Survey of their Perceptions and Trajectories after the 2014 Conflict with ISIS – Arab Reform Initiative

Iraqi Youth in Flux: Survey of their Perceptions and Trajectories after the 2014 Conflict with ISIS

(Paris/Tunis/Beirut, 13 September 2022) – The Arab Reform Initiative (ARI) is releasing today a report examining how Iraqi youth have been affected by the 2014 conflict in Iraq.

The report, titled “Perceptions and Trajectories of Youth in Baghdad, al-Basra, and Mosul after the 2014 Conflict with ISIS”, is based on an extensive face-to-face survey with 676 youth (aged 18-28) that was conducted in summer 2021 in the country’s three major cities. It seeks to understand how Iraqi youth’s political views, political participation, civic engagement, and peacebuilding efforts have been affected by the conflict, and their understanding of key concepts and values such as citizenship, social justice, and peace. It also examines how youth – a social group that is far from being homogeneous – managed to carve out opportunities for livelihood and strategies for survival and wellbeing in such a critical conflict/post-conflict context.

“This study fills an important knowledge gap on the economic, social, and political trajectories of youth in conflict-afflicted Iraq. It provides key data that should help policymakers and Iraqi observers better understand the lived realities, aspirations, and ambitions of Iraq’s youth,” said Farah Al Shami, Research Fellow at ARI and author of the report. “The need to understand youth and their realities and aspirations is essential today for protecting the country’s social cohesion as Iraq’s politicians take the country to the brink again.” 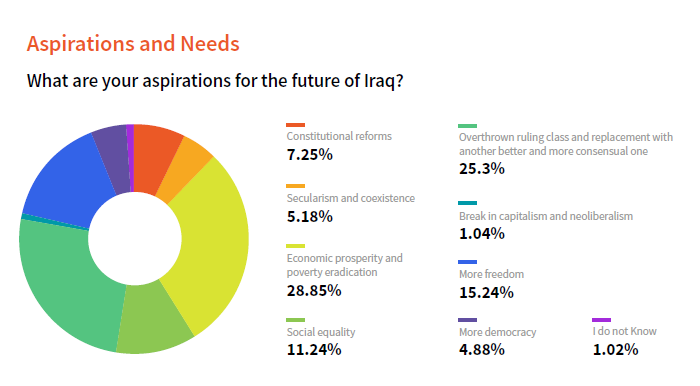 The study delves as well into Iraqi youth’s personal lives and strives to understand their trajectories with regards to marriage, mental health, leisure time and type of activity, as well as acceptance of social norms, and how these have been affected by the Iraqi conflict. Finally, it aims to understand youth’s aspirations and priorities for themselves and for their country, and to assess the effectiveness of State and non-State responses and in particular youth policies and programming by non-governmental organizations, donors, the Iraqi government, and Iraqi local authorities.

The survey and the ensuing report are part of ARI’s broader work on how youth in Iraq and other Arab countries have navigated armed conflicts in the last decade.

“This survey study is one key way to break the dominant discourses surrounding youth in contexts of conflict and post-conflict, which tend to focus on youth as development investments, threats to security, or agents of the future. Such discourses often lead to paternalistic attitudes by the different actors and to future-focused interventions that are disconnected from the youth’s current realities, expectations, and aspirations,” said Sarah Anne-Rennick, ARI’s Deputy Director who is leading on this work. “The study offers a clear snapshot of how youth’s present experiences are shaping their capacities, knowledge, needs, and aspirations amid a myriad of challenges, and such an approach is essential for devising policies and programs that are on point.”

Surveyed youth expressed apathy towards formal politics and fear of engaging in politics or expressing political views/affiliations/support for security concerns. 39% of them confirmed that the conflict made them abstain from engaging in any form of political participation. Nonetheless, 78% of surveyed youth believe that collective action is important/very important; 82% of surveyees do not support/encourage militarized/armed groups as a form of collective action; 78% of surveyed youth believe that the conflict has made all ethno-sectarian groups worse off and not only theirs; 34% of surveyees do not believe in the honesty of the elections in Iraq and 43% of them do not believe in the ability of the (then upcoming) elections to make a positive change; and 60% of the respondents are in favor of secularism in Iraq while very few of them are in favor of sectarianism. These selected takeaways are reflective of a relatively progressive generation of youth in Iraq, who wish for some form of national renewal and a rethinking of the basis of the nation-state.

Furthermore, the study finds that the conflict has had a significant negative impact on Iraqi youth’s education and employment. This impact is more pronounced on education compared to employment and happened mainly through the economic hardships that resulted from the conflict and less through direct security concerns. In addition to the conflict’s heavy socio-economic toll on Iraqi youth, only 7% of them believe that the conflict has ever been an opportunity to earn income or get income support, 50% of whom mentioned “earning income by having more job opportunities to consider/take due to the enlargement of the NGO enterprise,” 25% of whom mentioned “by receiving income support from social assistance and social safety nets programs provided by State and non-State actors [together],” and only 2% of whom mentioned “by joining armed groups/participating in the conflict.”

This socio-economic impact has also largely shaped Iraqi youth’s personal lives and choices, and their interaction with social norms. For instance, around 25% of youth have experienced a change in their marital statuses because of the conflict – mostly in the form of a delayed or un-occurred marriage.

The dataset and the enclosed metadata and codebook, the sampling frame, the surveyors’ methodological note, as well as the questionnaire of the underlying survey study can be accessed via this link[*].

More about the Arab Reform Initiative:

The Arab Reform Initiative is an independent Arab think tank working with expert partners in the Middle East and North Africa and beyond to articulate a home-grown agenda for democratic change. It conducts research and policy analysis and provides a platform for inspirational voices based on the principles of diversity, impartiality, gender equality and social justice.