27October
2018
New Political Pressure Groups in Lebanon and the May 2018 Elections:   Lessons Learned for Future Engagement

As part of its broad research project “Arab Youth as Political Actors”, the Arab Reform Initiative organized on 27 October 2018 in Beirut a Policy Dialogue meeting that brought together over 20 youth representatives from civil society groups as well as new Lebanese political forces to discuss their participation, efforts, and goals in the May 2018 parliamentary elections. The participants to the discussion, which included representatives from Beirut Madinati, Sabaa, Libaladi, the Lebanese Association for Democratic Elections (LADE), Tawasul Online, AUB Secular Club, Center Research House, the SMART news agency, and Fair Trade Lebanon, present a break from “politics as usual” in the Lebanese political scene. During the May 2018 elections, their candidates provided an alternative to the traditional political elites; they acted as opposition to mainstream political parties; their platforms directly addressed issues such as corruption and gender equality; and they sought to break from the sectarian nature of the Lebanese political system. While these groups and activists ultimately had relatively little electoral success, they did succeed in acting as a political pressure group that helped broaden the political agenda and scope of issues. The objective of the Policy Dialogue, which included a series of presentations followed by a broader debate, was to take stock collectively of what actions were achieved, what succeeded and what failed, and to draw lessons learned for future engagement – and in particular by youth - in Lebanon’s elections and formal political sphere.

Although the alternative political groups and civil society actors had disappointing election results, they did not feel that their success or failure could simply be measured by taking stock of the ballot box. As participants to the Policy Dialogue explained, their current role and goals in the Lebanese political scene is not to compete with the established sectarian political parties, nor to present their efforts as a zero-sum game of “Us vs. the Mainstream Political Leadership.” They admit that, without the huge resources of the traditional political parties, their chances to win are greatly reduced. However, the simple act of running in the elections, along with carrying out other political activities and social mobilization, allows them to as a pressure group or watchdog, giving voice to popular complaints and demands. In this sense, as a political pressure group, they do not consider the election results as complete loss or disappointment, but rather as a partial success upon which they can build for future electoral cycles.

The participants at the Policy Dialogue also identified what were, in their own personal experience, the most salient reasons for the lack of electoral success in the May 2018 elections. Focusing in particular on internal reasons endogenous to their political groups and campaign efforts and not broader external reasons, the participants cited problems with how candidates were chosen along with the profiles of the candidates themselves as one important factor in the poor election results. For example, one participant spoke of the problem of legitimate representational capacity: while the candidates stemmed from the middle and upper classes, their target constituencies were the poorer sectors of Lebanese society. This class gap created a lack of trust in the eyes of targeted voters. Hand-in-hand with this, the priorities of the candidates were established with respect to issues facing the middle class, whereas they sought to address the lower classes. Likewise, a representative from Beirut Madinati, who had participated in the Kollouna Watani coalition of civil society and alternative political groups, explained that the manner in which the candidates were chosen was also problematic, with little preparation given to the selection process. Indeed, the problem of candidate selection was roundly cited as a major flaw in the lead-up to the May 2018 elections, resulting in candidates who lacked legitimacy in the eyes of their targeted constituents and did not necessarily embody the agenda and political ideals that the movements aimed to achieve.

Related to this were the internal organizational problems that were seen as obstacles to electoral success. While certain groups, such as Beirut Madinati, had internal efforts to streamline their organizational structure and develop democratic governance, other groups felt that their emphasis on flexible internal structure acted as a liability with respect to more traditional political parties. These internal organizational problems played out in different ways that reduced the ability of the groups to achieve electoral success. Contests for leadership, for example, served to weaken alternative political groups by creating internal factions and wasting time that could have otherwise been spent campaigning. In addition, the lack of sufficient funding and poor access to media were cited as reasons for the lack of electoral success.

Another important factor cited by the participants was the competition between the alternative political groups and the lack of unity on common goals between movements. While there exists a shared sense of community among these new political forces, who view themselves as a reflection of Lebanese society in its ensemble rather than something entirely new, the participants admitted that they failed to effectively communicate with each other, and in certain cases were indeed fighting. Likewise, even within the Kollouna Watani coalition, the internal organizational functioning represented less a unified whole than a reproduction of traditional political parties.

Perhaps more importantly, the absence of broad shared demands upon which the alternative groups could unite, or a common ideological framework based on shared frames for diagnosing political issues and proposing solutions, created an important messaging problem. As numerous participants expressed, it wasn’t clear for average citizens that a solid political alternative was being presented, precisely because the key messaging of the groups and their manner of framing the issues lacked unity.

Finally, the participants identified the lack of staying-power in the public eye of the new civil society and political groups who are trying to break with traditional Lebanese politics. While 2015 represented an important moment for the establishment of this political alternative, with the YouStink movement and then Beirut Madinati in the municipal elections a year later, participants felt that the momentum generated at these critical moments was not sufficiently sustained in the lead-up to the May 2018 elections. Likewise, with the end of this latest electoral exercise, the presence of the new civil society and political groups has diminished too drastically. As one participant stated, it is impossible to have success if these movements only appear in at the moment of elections.

Turning to lessons learned and recommendations for future electoral cycles, the participants put forth a number of ideas to guide their work moving forward. A large portion of the debate involved the new electoral law. Participants agreed that there is a strong need to better understanding of the details of the new proportional system law in order to develop a more effective campaign strategy in the next elections. Hand-in-hand with this is the importance of raising awareness about voting, the new regulations governing it, and the voting responsibility of citizens to increase popular participation.

Along with this was the urgent need to build their own constituent bases. Participants focused on the need for more bottom-up campaigning, and the need to create and incorporate different structures such as family associations and syndicates in order to build larger constituencies. As one participant expressed, there was an absence of evidence-based planning for building a solid constituency; moving forward, the main challenge is to solidly define who this political alternative is and who it is supposed to represent. Yet, as was commonly acknowledged, there is an important level of popular disinterest in elections and the act of voting, as low voter turn-out demonstrated, and a lack of confidence in the political process more generally. Building constituent bases thus requires instilling belief that change can be achieved through the vector of alternative political and social movements. One way to achieve this would be to focus on small demands and consolidate small victories instead of focusing on the demand large-scale systemic change.

In terms of messaging and platforms, the participants pointed to the need to adopt a clear agenda and set of well-defined policy goals, and not simply overarching but vague promises of change, along with concrete policy solutions upon which campaigns would be based. In this sense, replacing the current political class with a viable alternative hinges at least partially upon the ability to propose solutions to the endemic problems (such as corruption) of the current system; yet, as the participants acknowledge, civil society and alternative political groups do not know themselves what such policy solutions would look like. Moreover, given that differences exist between them in terms of priorities and platforms, the groups debate whether or not they should unite under the broadest shared goals or instead maintain their niche issues. While some argued in favor of unifying on major priorities around which the entirety of the Lebanese population can rally, with splinter groups only forming around distinct issues (such as LBGTQ rights), all agreed that splinter groups should not form around demographic or sectarian blocs but rather issues themselves. This should be combined with efforts to communicate small wins in order to demonstrate concretely the capacity of the political alternative to achieve meaningful results.

With regards to youth in particular and the means to further activate their engagement in Lebanese politics and the new political alternatives in particular, the participants agreed that the county’s youth are not apolitical per se; on the contrary, participants attest to the interest that youth hold for “politics” writ large. Rather, they cite that they lack political maturity among youth as the larger obstacle to inciting further engagement. As participants explained, youth voting patterns and the selection of their political positions stems from family consensus rather than personal reflection. In response, a variety of recommendations were proposed, including the lowering of the voting age, raising awareness of politics among high school students through civics education, and the creation of forums for debate to increase the political awareness of youth and to foster meaningful discussion between political opponents.

Participants also stated that the issue of politics and its importance in everyday-life must be part of their discussion between electoral cycles, and not simply at the moment of elections. In practice, this could mean, for example, framing issues such as economic development and education from distinctly political perspectives in order to raise awareness of the innately political nature of social life. Concretely, this could be achieved through building student unions and holding student elections, which would also provide youth with increased access to the process of voting. Participants to the Policy Dialogue also emphasized volunteering as a means to activate youth civic mindfulness, and, in turn, transform them into future political actors. 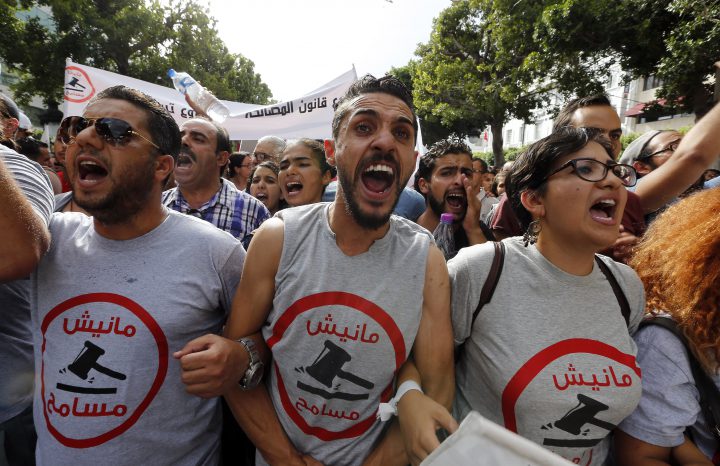