The Lebanese diaspora and the upcoming elections: Lessons from the 2018 voting – Arab Reform Initiative

The Lebanese diaspora and the upcoming elections: Lessons from the 2018 voting

This report examines the choices of the Lebanese diaspora in the 2018 parliamentary elections—the first time out of country voting was allowed—in order to offer some insights on the diaspora’s vote potential impact in the upcoming elections.  Wide efforts to encourage the diaspora to vote, led by Lebanese activists all over the world, have succeeded in getting over 225,624 Lebanese on the out of country voters’ list—almost a threefold increase from the last elections in 2018.

Political researcher and data analyst at The Policy Initiative

The 2022 parliamentary elections will be the first electoral test at the national level since the October 2019 mass protests and the August 4, 2020 Beirut blast. The recent and ongoing wave of emigration triggered by the economic crisis has increased the number of eligible Lebanese voters abroad, who have been the target of several mobilization campaigns by diaspora groups.

As many Lebanese were pushed to leave their country by a political class that has driven the country into its most severe crisis, a sense of hope about the diaspora helping vote the established sectarian parties out has emerged. This hope is premised in part on a widespread assumption that the Lebanese diaspora is able to vote freely, given that they do not benefit from clientelist services, are not the target of vote buying, and do not suffer from intimidation and pressure to vote in a certain way. However, questions abound whether the diaspora’s political leanings are fundamentally different from that of the population in Lebanon. After all, a large part of the diaspora are emigrants who left during the Lebanese civil war, and many may still support the old sectarian political parties. Other emigrants are individuals who have left their families behind in search for better opportunities, and their families, who are still in the country, may not fall outside clientelist networks.

While no recent figures on the political preferences of the Lebanese diaspora exist, a look at their choices in the 2018 parliamentary elections—the first time out of country voting was allowed—offers some insights on their role in Lebanese elections and potential to vote the establishment out in the May 2022 elections. In seeking to study the voting behavior of the Lebanese diaspora in 2018, this study uses the official elections results published by the Ministry of Interior and Municipalities, disaggregated by polling station.1The results are available at: http://elections.gov.lb/Home.aspx  We collected the results at the polling station level and extracted the information of voters, such as district of origin, country, and city of residency.

In the first part of this report, we analyze the results at the national level and compare the voting choices of Lebanese in the country to those of Lebanese abroad, in the aggregate. This includes an analysis of participation rates and votes for the main political parties. The second part of this report provides a country level analysis, focusing on five countries which had the largest share of out-of-country voters: Canada, Australia, the United States, France, and Germany. Finally, in the third part, we zoom in on the results by electoral district. As different parties ran in each of the 15 electoral districts, the district level analysis provides a more detailed look at the findings.

Wide efforts to encourage the diaspora to vote, led by civil society organisations and Lebanese activists all over the world, have succeeded in getting over 240,000 Lebanese to register in their country of residence—almost a threefold increase from 2018—with 225,624 ending up on the voters’ list.2The number of voters on the final lists is lower than the number of individuals who registered because not all of those who registered are eligible to vote. These numbers suggest an increased interest of Lebanese abroad to participate in the electoral process, although whether those voters already resided outside the country or are recent emigrants is unknown.

The number of registered voters abroad increased nearly fivefold in Asia (mostly the GCC), from around 13,000 in 2018 to 57,000 today, almost tripled in Europe and Africa, doubled in North America and Australia, and increased by 1.3 in South and Central America, where registered numbers were lowest in 2018. 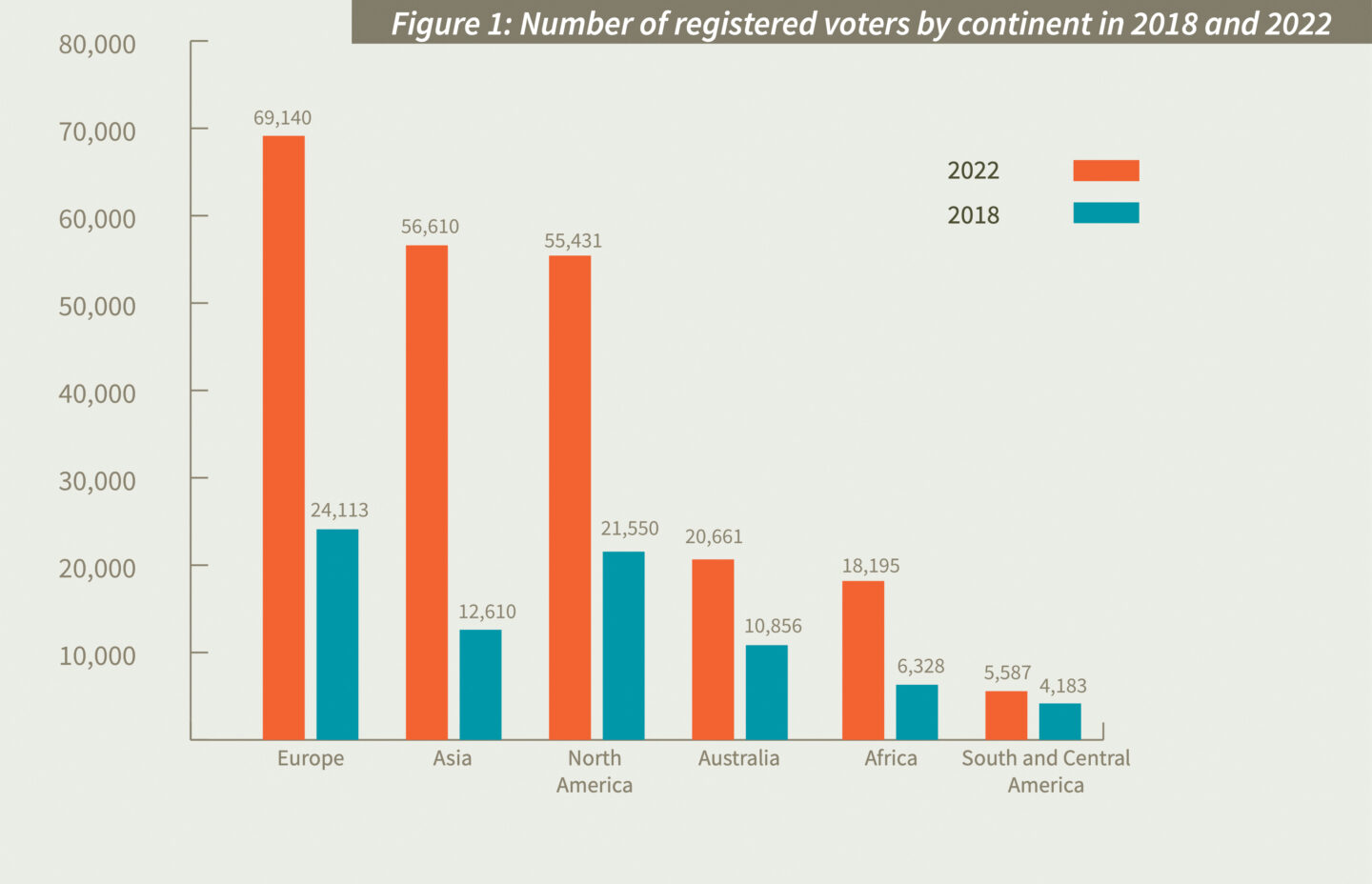 The increase in the number of registered voters abroad for the 2022 elections could translate into higher turnouts, by leading to more voting centers being opened across countries and cities. In 2018, only 59% of Lebanese abroad who registered to vote ended up voting. However, according to Lebanon’s electoral law, a polling station can be established in cities with at least 200 registered voters, and if the increase in the number of registered voters is associated with the creation of additional polling stations (compared to 2018), this will make voting more accessible to larger segments of the diaspora.

Lessons from the 2018 elections

Looking at the 2018 elections results enables us to make several observations about diaspora voting dynamics and suggest lines of inquiry in terms of their vote in the upcoming elections.

In 2018, Lebanese voters outside the country did not have a determining role in who made it to parliament for two main reasons: (i) out of country voters represented only 3% of Lebanese who participated in the elections (less than 50,000 of them, out of the nearly 80,000 who registered, went to the polls) and (ii) the diaspora voted for the established sectarian political parties in the most part.

Only 6% chose candidates on opposition lists (less than 3,000 voters) while the remaining 94% selected the usual suspects, although there were some winners and losers among the traditional political parties. In the aggregate, the diaspora mostly supported the Lebanese Forces (LF) and Free Patriotic Movement (FPM), and at much higher rates than residents, while they showed lower support for Hezbollah and the Future Movement (FM). This may be partially due to a difference in the demographics and sectarian affiliation of out of country voters compared to Lebanese voting inside the country.

It is also clear that politically speaking, the behavior of the Lebanese diaspora varies greatly from country to country, which is due in large part to the different contexts of the waves of emigration as well as the sectarian composition of a particular diaspora. Among the main countries voters were registered in, those in Canada, Australia, the United States, France, and the United Arab Emirates mostly supported LF and FPM, while Amal and Hezbollah received most of the votes in Germany as well as across African countries, and the Future Movement performed best in Saudi Arabia. In no cases did anti-establishment lists come close to ranking first.

Looking at the results disaggregated by country can show where the diaspora will be more likely to vote for anti-establishment or independent parties. In 2018, candidates on anti-establishment lists performed best in France (13%, 590 votes) and the United Arab Emirates (13%, 414 votes). Most of the remaining votes for anti-establishment lists came from the United States (8%, 389 votes) and Canada (5%, 343 votes), followed by Saudi Arabia (10%, 182 votes), while barely any voters in Australia, Germany, as well as throughout South America and African countries voted for them (less than 2%, or 100 voters, in each). If those who registered to vote in Europe (particularly France), North America, and the GCC show similar preferences in 2022, the share of votes going to anti-establishment political groups can be expected to improve.

What possible impact can the diaspora have in 2022?

The number of emigrants who registered for the 2022 elections, despite being far higher than that in 2018, still only represents 6% of total eligible voters for the upcoming election. While similarly to 2018, we can expect turnout among the diaspora to be higher than in country voting (mostly because out of country voters have to actively register while everyone in country is automatically registered), numerically speaking the diaspora will remain a marginal player in terms of the number of votes it represents.

From this perspective, it becomes key to examine whether the diaspora votes can be important in particular electoral districts, where anti-establishment parties may have a chance of winning a seat.

In 2018, the two districts where opposition lists came close to winning were the following: 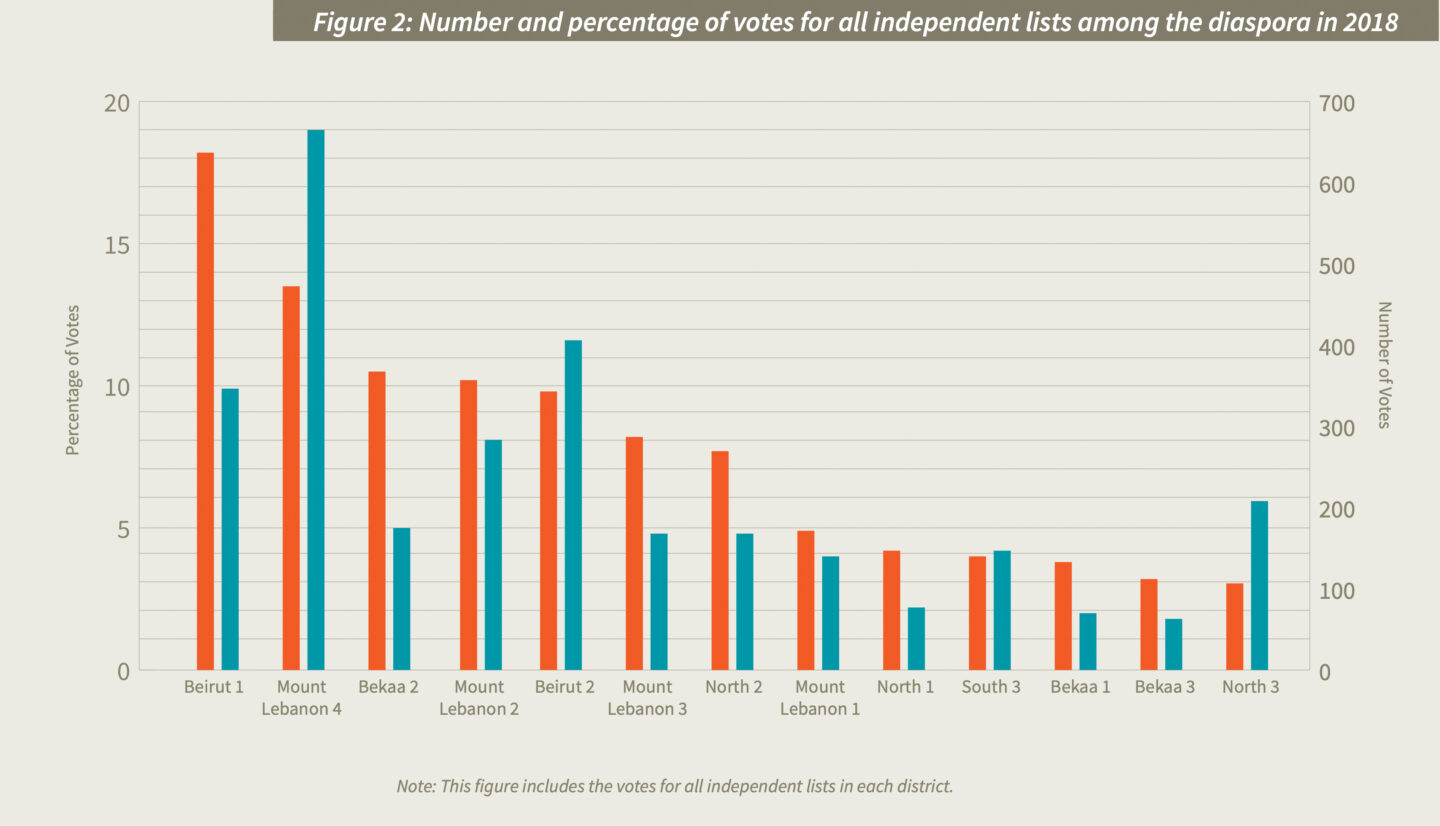 Note: This figure includes the votes for all independent lists in each district.

One of the challenges in evaluating the impact of out of country voting on anti-establishment parties’ results in 2022 is the extent to which a shift will occur amongst the diaspora supporters of traditional political parties.

While one would expect a shift in voting behavior in this upcoming election given the disastrous situation in the country, the scale of this change is unknown—particularly as political dynamics amongst Lebanese diaspora communities are badly understood and new anti-establishment parties have not campaigned extensively amongst diaspora groups. In other words, it is unknown how many of those who voted in 2018 will switch their vote to opposition parties.

Furthermore, the political allegiance of the additional voters registered abroad—i.e. those who were not registered outside the country in 2018—is also unknown. For instance, we do not know how many of them are first-time registrants, or whether they are Lebanese who emigrated since 2019, but the voting behavior of these individuals will be key. While much of the drive to register additional voters came from independent groups and activists who are generally opposed to the sectarian political parties, these parties have increased their electoral activity in diasporic communities in the lead up to the elections and have maintained and strengthened their clientelistic networks abroad.

The poor performance of anti-establishment electoral lists in 2018, among both residents and the diaspora, does not mean that they do not stand a chance in the next elections. However, the diaspora is unlikely to have a pivotal role as a block of voters. Their votes may make a difference in certain competitive districts, but ultimately, over 90% of voters are in Lebanon, and they are the ones that will carry the most weight.

Beyond the number of out of country voters, the role of the diaspora in elections and in Lebanon’s politics more broadly needs further examination. The diaspora is a source of funding for political parties and candidates in Lebanon and the role of the financial resources they are providing deserves to be studied post-elections. The diaspora can also be a key “influencer” on the voting behavior of many who are in Lebanon. Given the spiraling economic crisis, diaspora members are increasingly a key lifeline for their families in Lebanon—in some cases, the only lifeline. These diaspora members can mobilize and convince family members to go out and vote. After all, only 49% of voters participated in Lebanon in 2018, and ultimately, increasing this percentage will be essential.

Ultimately, those in the diaspora hoping for political change in Lebanon need to organize themselves for a long effort. They have shown that they are willing to protect their right to vote in Lebanon and are keen to mobilize. In and of itself, this represents a small but important step forward.

Political researcher and data analyst at The Policy Initiative