Sudan: Managing COVID-19 Pandemic During a Time of Transition

Sudan’s current transitional government has inherited a fragile health system that suffered years of neglect and underinvestment. The spread of COVID-19 poses important challenges to the country’s health and political structures. This Q&A looks at how Sudan’s government and non-government actors are faring against the spread of the pandemic and the impact of the lockdown on the political transition in the country.

On 13 April, the Sudanese government announced a lockdown of the state of Khartoum and took other measures to confront the pandemic. With a transition government in place and a health system that has been neglected for years, how are Sudan’s government and non-government actors faring against the spread of the coronavirus? And how is the pandemic impacting the political transition?

What is the COVID-19 situation like in Sudan today?

What measures has the government taken to respond to the coronavirus?

Like other countries, when the COVID-19 pandemic started, the Federal Ministry of Health (FMoH) began to screen passengers arriving in Sudan through different ports and to gather their information. Early in March, the ruling cabinet of ministers and the Sovereign Council formed the “High Committee for Health Emergencies” to coordinate governmental and non-governmental efforts for combating COVID-19. The Committee is made of members from the ministries of health, labour and social welfare, foreign affairs, internal affairs, information, and finance, as well as the head of the Central Bank of Sudan and representatives of the army, the police and the security services. All COVID-19 related measures and responses lie with the Committee, and its decisions are usually based on advice and information provided by the minister of health.

On 12 March, the government started to tighten the procedures for entry to Sudan from affected countries. The FMoH sent teams to monitor ports of entries from neighbouring countries and provided the necessary equipment for the isolation centres in those states. It also started monitoring the situation of the Sudanese abroad, especially those in countries that have recorded cases of coronavirus. On 13 March, the government reported the first case of infection (and death) of COVID-19, and two days later, announced the closure of all schools and universities.  On 16 March, the Security and Defense Council in Sudan announced a state of health emergency, with the government closing all airports, land and sea border crossings, except for flights carrying aid, technical and humanitarian support and pre-scheduled freight.

Since the announcement of the first case of COVID-19, the FMoH has strengthened the measures to combat the spread of the virus by deploying more staff and equipment to entry points and airports. It also allocated several buildings in Khartoum (Al Daman Tower in Central Khartoum, Universal Hospital in Khartoum North) and in several other state capitals to quarantine people coming from affected countries (especially those returning from Egypt by road). The quarantine was intended for all those who came from affected countries but without testing them. This measure was not effective as many of those quarantined did not comply. Large numbers of people, (estimated in the hundreds) have either escaped quarantine or refused to be quarantined. For instance, many of those who were coming from Egypt by road managed to escape from the buses carrying them to isolation centres. The FMoH also complained of a low rate of follow-up with the people who entered Sudan since some of them provided false phone numbers on the screening forms.

The government also used the police to enforce a partial curfew from 8pm to 6am, starting on 24 March in Khartoum state. On 31 March, the government extended the curfew time by two hours (to start from 6pm to 6am) and gave all governmental employees aged 55 and above as well as pregnant and nursing women paid leave until further notice. Some private sectors companies followed suit to support their workers. The minister of labour and social welfare formed a committee to address the needs of people who are going to be affected the most by the confinement measures.

On 13 April, the authorities announced a total lockdown in the state of Khartoum and suspended group gatherings and Friday prayers in mosques in Khartoum state and some parts of the country as the virus has spread beyond the capital, reaching other Sudanese states.

How transparent is the government about the Covid-19 situation?

What is the government strategy in dealing with COVID-19 and how successful has it been so far?

In April, the FMoH with the support of the WHO developed a country strategy to confront the pandemic, which includes a series of measures such as ensuring country-level coordination, planning and monitoring, setting up surveillance, rapid response team and case investigation and management, setting up national laboratories for testing, and providing operational support and logistics.

Although considerable funding (around USD47m) was requested by the UN from donors to apply those measures, their successful implementation faces many challenges. These include a weak, under-funded and fragmented health system, the poor infrastructure of health facilities (hospitals, isolation centres, and ICU units), the lack of essential supplies and equipment as well as the scarcity of trained and well-qualified staff, especially outside the capital. In addition, many parts of the country suffer from poor hygiene practices and a lack of access to water and improved sanitation services. Getting the proposed funding from donors to combat COVID-19 in Sudan is also under question, as the country is not considered a hotspot for the COVID-19 spread compared to other countries. With the current lack of funding at the FMoH, the effective implementation of the national strategy will be greatly at risk.

Many health professional bodies and doctors’ entities have called for the minister of health to resign for his “mismanagement of the pandemic response”. On 13 May, the Sovereignty Council announced that they submitted a recommendation to the prime minister to take the “necessary constitutional measures to remove the minister of health”. This was firmly rejected later by the cabinet of ministers and reflects the fragile relationship between different components of the transitional government.

The rising conflict between the minister of health and his opponents in the ministry, the health sectors and in the Sovereignty Council will negatively affect the COVID-19 response at a time when united efforts and a strong and committed leadership are needed.

Who are the different government actors in the COVID-19 Response?

Since day one, efforts to combat COIVID-19 in Sudan have involved various actors but with little coordination. Later, several meetings between the FMoH, UN agencies, NGOs, community-based organizations (CBOs), various health professionals’ bodies and associations were held to better coordinate the response to halt the spread of the pandemic. Beside the FMoH and the state ministries of health, other governmental and non-governmental actors are also playing an important role in the country’s response so far:

What role has civil society and the private sector played so far?

In March, the Sudanese Platform for Combating Coronavirus (the SPCC) was formed through an initiative by representatives from the medical field, several engineering companies, groups from the private business sector, and volunteers from the local communities together with community-based organizations. The SPCC operates under the guidance and protocols set by the FMoH and has been very effective in raising funds, procuring supplies and coordinating between private-sector entities that wanted to participate. Donations of money, materials, and services are directed by the platform to fill the gaps in medicines, equipment, laboratory supplies, PPEs, hand sanitizers, and soap. The Platform has also been involved in rehabilitating and preparing the treatment and isolation centres.

Can the health system cope with a further spread of COVID-19?

The new transition government has inherited a very weak and fragmented health system that was allocated only 1% of the government budget by the previous regime. Sudan’s hospital beds capacity was at 0.8 units per thousand people in 2013. When the pandemic started, the ICU beds in the whole country were estimated to be around 500 beds only. The transitional government has significantly increased the spending in health to 9% of the 2020 government budget announced on 30 December 2019. It was significant that for the first time in decades the budget allocated for health (51.4 billion SDG) slightly exceeded that allocated to defence (50 billion SDG). The FMoH’s new leadership has started to re-build the health system in terms of policies, infrastructure and personnel - efforts that were put on hold because of the pandemic. The health system today is characterized by a lack of health professionals, weak supplies and logistics, and severely understaffed and under-equipped health facilities.

The post-COVID-19 era will represent a good opportunity for the new leadership to build a stronger health system and to invest more in health infrastructure and professionals. If the Sudanese public health system manages to absorb the shock of this pandemic and contain it without further increase or explosion in the number of cases, it will benefit from the funds, resources and logistics that were hastily dedicated to the COVID-19 response. This may contribute to changing health policies and the government’s funding priorities. One of the most important lessons learnt from the COVID-19 tragedy is that preventive medicine is as important, if not more important than curative medicine, and more investment is needed to strengthen it; especially since most of the scarce funding that was allocated to the FMoH during the last regime went to curative services.

Do you think the current political situation interferes with the government COVID-19 response?

I believe that the political situation does not preclude a positive and adequate response to confronting the pandemic.  The transitional government has come after 30 years of dictatorship that left the country in shambles. The Sudanese people put a lot of trust and hope on this government. This was obvious from the outpouring of community and private sector support in terms of financial donations as well as voluntary contributions from community members to fighting COVID-19. People feel that, for the first time, the government through the FMoH is honest with them and updates them with accurate news about COVID-19 after they lived 30 years of oppression and information blackout even on health issues.

On the other hand, the lockdown has affected the political life in Sudan. It stopped many political events and tours that were being organized by various parties in preparation for the elections scheduled after the three years transitional period. The lockdown measures also stopped or reduced the number of marches and demonstrations that recently became a common phenomenon in the lives of many Sudanese. While the revolutionary forces who led the December 2018 uprising and are now backing the transitional government complied with the lockdown and social distancing measures, supporters of the former regime tried many times to organize marches calling on the transitional government to step down. These were quickly dispersed by the security forces which took the state of health emergency as a pretext to crack down on them.

What about the COVID-19 situation in areas controlled by SPLMN-N?

On 30 March, and in response to the COVID-19 pandemic, Malik Agar, the president of one of two factions of SPLM-N, released a statement encouraging everyone to take maximum precautions and drawing specific attention to the heightened vulnerability of those in refugee and IDP camps.  He instructed people to avoid gatherings and called on the international community for support, especially for those in vulnerable situations.  In Al-Hilu territory (the other SPMLM-N faction), the de facto health authority held multiple COVID-19 response meetings to discuss awareness campaigns, prevention, and if necessary, potential case management.  As a preventive measure, all schools have been temporarily closed in the two areas. 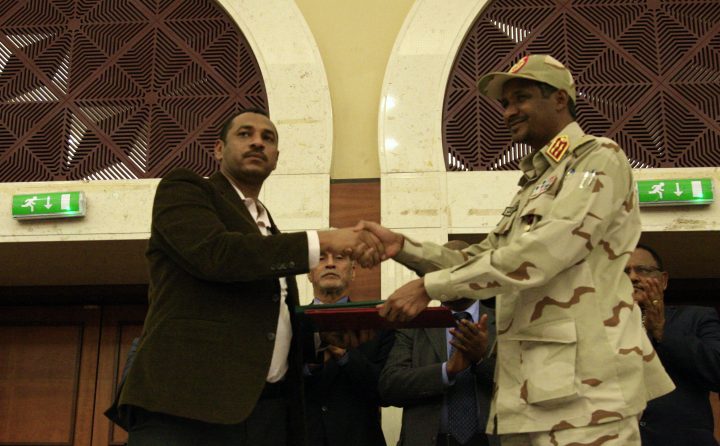 Sudan’s Power-Sharing Agreement:   Towards Transition or a Game of Tajility? 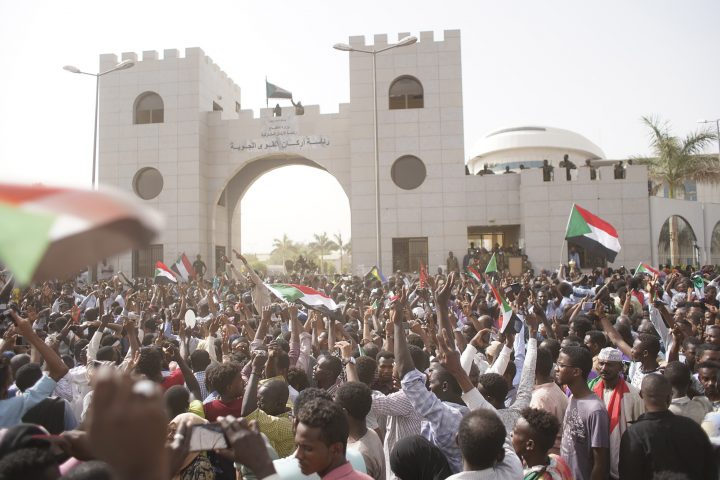 The Fall of al-Bashir:   Mapping Contestation Forces in Sudan