How can activists best advance environmental reforms in MENA?

*This paper is the winning submission of our 2021 Student Essay Contest.

Decarbonising the current energy system does not secure a sustainable future if challenges beyond carbon emission are ignored and the economic model which continues to exacerbate the challenges we face is not rectified. Genuine environmental reform requires an intersectional approach, one which does not just patch over problems but instigates reform. The socio-political and environmental crises we face are symptoms of the same problem and must be treated as such. In order to reach a sustainable future, policies should resolve current issues without creating or exacerbating existing challenges. If there is a reason for social movements to exist, it is to challenge dominant values as flexible and changeable and to offer alternative ways to live. Across the MENA region, there are growing calls - from experts and activists - for reform in the region to simultaneously deal with wider socio-political issues whilst decarbonizing energy systems.

In the MENA region, states are preoccupied with developing renewable energy (RE) at large scale. Examples include Morocco’s Ouarzazate Noor Solar Plant and Dubai’s Mohammed bin Rashid Al Maktoum Solar Park. This is an extension of the existing energy model. Megaprojects are political as much as economic projects. They support exclusionary political regimes and enable states to strengthen existing socio-political systems, and thus further reduce the political autonomy of the individual. Energy megaprojects are projections of state centralization, as they require no input from the localities in which they are placed. They therefore actively reduce political freedom. An alternative model - the decentralised RE model - allows for ownership and operation of RE to remain in the communities where it operates. Solar and wind technology is scalable, whereas previous technology was not. This allows for the creation of an energy system that is not only sustainable but also democratically owned and designed, and socially just. A decentralised system, whereby individuals have a direct say in how their energy systems operate, is vital in ensuring energy justice  is achieved alongside climate justice.

The structure of energy systems has wide-reaching cultural, socio-political, and economic impacts. MENA activists must understand energy as a critical tool for advancing environmental, political, and social justice causes. Since the energy technology installed today will operate for years to come, we face a once-in-a-century opportunity to build a fairer and greener system. Efforts should be focused on:

The barriers to consumer ownership of RE are political, legal, administrative, economic, managerial, and cultural. Activists must recognise that developments are needed on a number of fronts simultaneously.

Jordan’s energy transition thus far is a strong example of a socially just energy transition. Regional activists should seek to replicate aspects of its regulatory and policy framework into other regional energy systems. In 2015, Jordan financed the installation of 400 household solar PV systems. Each system ranges from 1 to 4 KW in size. The government grants loans to homeowners in rural communities, who pay back the loan with the money they otherwise would have spent on their energy bill.  Once the loans are repaid, the ministry re-invests the money into other homes. This shows how decentralised RE systems are possible in the MENA as long as sound regulation, created in a supportive political environment, is in place.

However, most examples of MENA RE uptake instead show a reliance on highly-technologically developed systems without the development of any policies which allow for decentralisation. Attempts to deal with climate change independent of ethical, moral and political entailments, relying solely on technical adjustments, obfuscate the simple realization that not only the fuels used but also the very system in place are not sustainable. This mindset remains prevalent across MENA.

Decentralised RE would enable individuals to have a greater say in how their energy systems operate, bolstering socio-political autonomy which is currently lacking. Interacting with energy systems in this way will also teach the importance of individual/community responsibility for reducing energy consumption, a related environmental problem across MENA states. Greater awareness of how decentralised energy can support decentralised politics need to be established. Activists have a crucial role to play in educating and building a broad-based inclusive movement.

Just transition plans have been implemented in several localities and at the State level across the world. Support is growing for legislation which supports decentralised transitions in many countries. Activists should campaign for the inclusion of energy democracy theory into university curriculums, as well as featuring in the work of global RE institutions based in MENA countries such as the IRENA.

Given the existential threat we now face, largely due to burning fossil fuels, our relationship with energy systems must be reevaluated. Across the globe, community owned RE revolutions are underway and are possible where robust political and legal regulation is in place, combined with public support and the existence of local organisations committed to the development of such systems. The development of such frameworks is where not only environmental but social justice and political activists should focus their efforts, once awareness of the role that energy systems could have in empowering change has been established. Policy makers must be informed that publicly financed and owned RE are a win-win for individuals and for the climate. Concerned citizens must push for policy changes that allow for such a system to be developed.

Activists should also recognise the favourable conditions the region’s urban environments offer for building a publicly owned and managed decentralised energy system. Promoting energy democracy at the municipal level will create a base to drive change on a national scale.  Decentralised urban systems will also reduce the requirement for further energy megaprojects.

As in political activism, proponents of energy democracy must remember the importance of broadening the scope of democratisation rather than implementing democracy outright. Examples of structures conducive to greater participation in energy policy include individuals deciding on wind turbine locations or consumers deciding the prices of their municipal energy supplier. Reformation of energy systems takes time.

Activists must develop organisations which support community ownership of RE assets. These organisations should offer managerial and financial advice to individuals/communities based on sound understandings of regional and national regulations. Such organisations have a major role in catalysing a decentralised energy transition and will prove instrumental in determining the form of transition that takes place. With decentralised energy systems, each locality’s requirements will be unique. However, regional dialogue is imperative in terms of facilitating learning and development opportunities, as well as providing a support base and showcasing successes as they arise. Again, activist efforts are needed not only to set up such organisations but also to sustain and develop them as the transition progresses.

The transition away from fossil-fuels is an important component of the fight against climate change. Yet what is often overlooked is the centralised ownership and control of energy by corporate and state actors. This overwhelmingly favours electricity generation for the sake of profit, instead of human and ecological realities. Those who are most directly impacted are excluded from ownership and circles of decision-making. In order to create a more sustainable society, this needs to change.

The view of ‘energy as commodity’ is prevalent today even as the energy industry transitions to RE sources. Transition is inevitable, justice is not. Meaningful environmental reforms must recognise the intersectionality of the problems we face. A decentralised energy system will not only establish a sustainable energy system quickly and efficiently but will simultaneously alleviate socio-political grievances, symptoms of the same system causing the environmental degradation activists seek to solve. Proponents of decentralised energy must recognise the widespread benefits these systems offer and thus lobby the support of a wide network of individuals, activists, and communities across the MENA region. 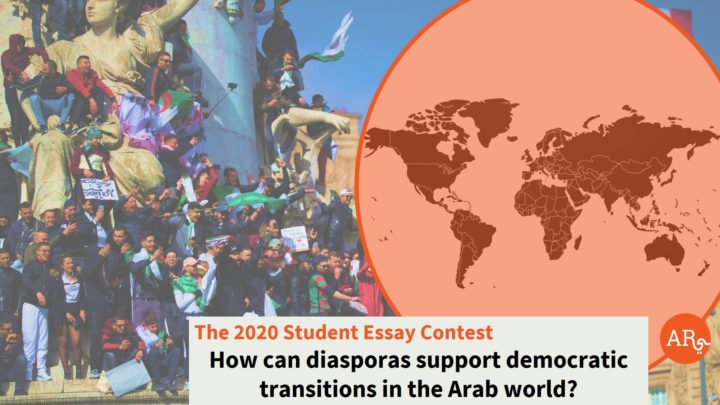 Diasporas:  A Global and Vibrant Force for Arab Democratization