With ongoing protests in Algeria and wide calls to boycott the presidential poll in July, Algerians’ demands for radical regime change remain relentless. The army’s announcement it is considering all options to resolve the current crisis does not resonate well in a country where the army has been closely tied to regime interests. In this interview, Professor Mouhoud provides a much-needed context to better understand how the protests started and the potential scenarios that may unfold in Algeria over the coming months.

Professor of Economics at Paris-Dauphine University.

What relation does the 22 February movement bear to the Arab Spring?

First of all, this uprising is part of a long history of uprisings in Algeria. The country had already experienced major disruptions in 1988 with the youth riots. They had already fragmented the regime and initiated three years of unprecedented democratic openness. But there were also the Kabilya riots in 2001, the attempts at “Arab Spring” protests that the police nipped in the bud in 2011, and 2016 protests in the south of Algeria against the exploitation of shale gas. In the oil boom of the 2000s, but particularly in 2011 during the uprisings in Tunisia and Egypt, and owing to the reversal of the decline in oil prices in 2013, the government continued to subsidise consumerism (to around 30% of GDP). However, it overestimated its "security capital" and failed to appreciate the truth of warnings since 2014 on a possible and imminent popular uprising.

In 2015, with the then prime minister, and the short time in office of his successor Abdelmadjid Tebboune (May to July 2017), the government sought to implement structural reforms and change the clientelist relationship between business and the state. But very quickly, with the return of Ahmed Ouyahia as prime minister in summer 2017, the government turned its back on reforms and embarked on an adventurous macroeconomic policy based on "non-conventional" financing (the famous money machine) to the tune of 35% of GDP in two years. However, 2016 was a year of excitement and impatience, with all the latent economic and social ingredients in place. The slogans of young people, especially in the stadiums, showed the population’s impatience. Some surveys, such as the one by Arab Barometer, showed a dramatic loss of confidence in the government, at the same time a feeling of personal physical security was being consolidated.

In parallel, Algerians carefully followed and observed the developments of the Arab Spring in other countries. This has helped to give the popular movement a remarkable political maturity. Neighbouring experiences play the role of both repellent – the Syrian, Egyptian and Libyan examples being perceived as counter-models – and example. The Tunisian experience, in particular, is seen as a model of political transition. The extent to which the uprisings in Egypt, Tunisia and elsewhere have been examined and assimilated by today's Algerian demonstrators, in their forms, methods and development, into the way they have organised themselves, for example, to protect women in demonstrations or to clean the streets, are two practices directly linked to the desire not to repeat certain negative experiences of Cairo’s Tahrir Square uprisings (whose origin is unknown) or of Tunisia.

In what ways is the movement "politically mature"?

On the one hand, because the neighbouring situations were examined and perfectly assimilated by the demonstrators. But also because, through the Tunisian example, Algerians have understood that a political solution to the crisis in their country exists. The Tunisian Constitution represents, therefore, a unique example in the Arab world, guaranteeing freedom of conscience, gender equality, and respect for religions. In other words, it has succeeded in building a historical compromise between the different parts of society, from women to Islamists, while guaranteeing a fundamentally secular framework. This example of an inclusive transition that took time and went smoothly despite economic difficulties can serve as a reference, and even a manual, for Algerian protesters.

Another element plays a central role in explaining the strength and maturity of the 22 February movement and its ability to overcome political divisions. The spectre of an "Islamist threat" is no longer operative. Although the government played heavily on the fears of the 1990s, including by rebroadcasting violent documentaries, the "security capital" that the authorities believed they possessed was shattered. Indeed, despite the social impact and the spread of religious conservatism, it seems that the population no longer wants the Islamists to come to power, if you listen to accounts from the mass demonstrations. Many Islamists have also discredited themselves by allowing themselves to be co-opted by the authorities.

In this respect, the question of oil and gas revenues has played a decisive role in the evolution of the Algerian situation. After the civil concord and oil boom of the 2000s, the state directly subsidised myriad projects (since 2013, 30% of GDP was distributed in all-out subsidies over a two-year period), which allowed the government to "disarm" certain opposition parties by integrating them "financially" into power. The opposition, including moderate Islamist parties, was thus associated with the political game and participated in government. Political Islam still seems to be present in society, but its nature has changed.

The movement has also matured because, within 20 years, Algeria has seen the development of a highly informed, connected and educated youth, due to the massive increase in access to higher education over the past two decades. Enrolment in higher education grew at an annual rate of 10 to 15% in the 2000s, increasing by almost 12 percentage points from 31% to 43% between 2011 and 2016, thus catching up with the worldwide average. Public spending on higher education as a percentage of GDP doubled between 2000 (1.2%) and 2010 (2.5%). However, the significant increase in education spending and the massive increase in access to higher education have led to a worrying deterioration in the quality of education, which poses significant challenges for the employability of young people.

In this sense, the current demonstrations have nothing to do with the 1988 riots, which were more like jacqueries (peasant revolts), or with the riots caused by structural adjustments and impoverishment following the 1986 oil crisis. In this sense, they are not comparable with what is happening in Venezuela. This is a political uprising that is extremely aware of the pitfalls that could threaten it.

How do the protesters position themselves in relation to these pitfalls that threaten, particularly the great national narrative of decolonisation still being brandished by the government?

It is very interesting to observe the extent of what is happening, in terms of re-appropriating collective memory. The official rhetoric tried out at the beginning of the demonstrations evoking an external influence behind the demonstrations did not take hold and was very quickly swept away. The popular movement seeks to reclaim the original Algerian revolution around emblematic figures of the national movement. The regime is, therefore, seeing its two main forms of "capital", as a guarantor of security and symbol of the memory of independence, completely eroded among young people. People feel colonised from the inside. In its form and power, this unprecedented Algerian uprising probably marks the transition from formal decolonisation through independence to real decolonisation: namely freeing itself from an authority in power that is organised as a predatory regime, hence the protests’ fundamental demands for a second republic.

In fact, in Algeria, the state is perceived as something external, a state unrelated to the people, as if this so-called "deep" state and the people lived in parallel without meeting. Links between the ruling clans and society do exist, through mujahedeen, the FLN, political parties, trade unions, and companies connected to the government organised within the Business Leaders Forum (whose president seems to have been arrested just recently), which constitute as many verticalised ramifications of interest groups associated with the regime, circuits of allegiance, connection and vassalage, but the population remains excluded from these networks. And these pillars, which maintained the state's control over the population, have fragmented one after another disengaging from the ruling clan.

What reconfigurations of the system are possible at this stage?

The prospect of the army firing on the crowd does not seem to be an option at the moment, as the watchwords of the increasingly massive uprising (millions of people demonstrate every Friday) insist on fraternisation between the army and the people, and the police and the people. The most likely prospect is that of clan-orchestrated disorder (such as attacks attributed to Islamists) that would justify a military coup d'état.

In this respect, two scenarios can be envisaged. The first, ideally, would see the army maintain its neutrality, accompany the transition process, and support the creation of a government of national unity, which would then be responsible for preparing a constituent body that would enshrine the peaceful revolution, a point clearly underlined during the recent protests. In the second, the army’s fierce will to remain inside the system (Article 102 of the Constitution) could herald a likely risk of it seeking direct control of power. The alliance between Bouteflika and Gaid Salah now broken down, what other alliances are likely to emerge within this oligarchy? That's the question. In such a scenario, an Egyptian-style solution, with direct military intervention, cannot be ruled out. Algeria will then go from an authoritarian regime behind democracy to an authoritarian military regime.

Is it conceivable that the Egyptian experience, with a violent military coup and the establishment of a military dictatorship, might be repeated here?

The Algerian demonstrators are fully aware of this and are very aware of the pitfalls to avoid. Admittedly, the Algerian model is very similar to the Egyptian case, particularly in the very strong links the army maintains with businesses. But unlike what is happening in Egypt, the Islamist paradigm no longer seems usable by the Algerian army. In fact, it was rather the Egyptian army that was inspired by the Algerian model, putting an end to the Morsi government (which was itself shaken by the popular uprisings of 2013) by a military coup d'état, as the Algerian authorities did with the FIS in 1991.

The Algerian demonstrators have fully understood the danger of continuity within the regime, and they are not fooled. They do not want this option. They no longer have confidence. We see them expressing their demands for a new republic that is truly democratic and free.

Professor of Economics at Paris-Dauphine University. 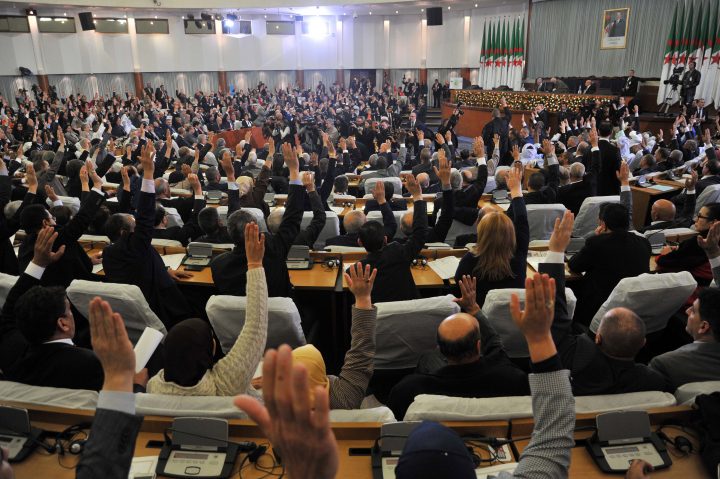 The Algerian Constitution:  Lip-service to Safeguards